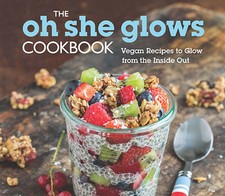 A self-trained chef and food photographer, Angela Liddon has spent years perfecting the art of plant-based cooking, creating inventive and delicious recipes that have brought her devoted fans from all over the world. After struggling for a decade with an eating disorder, Angela vowed to change her diet - and her life - once and for all. She traded the low-calorie, processed food she'd been living on for whole, nutrient-packed vegetables, fruits, nuts, whole grains, and more. The result? Her energy soared, she healed her relationship with food, and she got her glow back, both inside and out. Eager to share her realization that the food we put into our bodies has a huge impact on how we look and feel each day, Angela started a blog, Oh She Glows, which is now an internet sensation and one of the most popular vegan recipe blogs on the web.

This is Angela’s long-awaited debut cookbook, with a treasure trove of more than a hundred mouth-watering, wholesome recipes – from revamped classics that even meat-eaters will love, to fresh and inventive dishes – all packed with flavor. From rich and hearty entrees like the Crowd Pleasing Tex Mex Casserole and 15-Minute Creamy Avocado Pasta to decadent desserts such as Chilled Chocolate Espresso Torte with Hazelnut Crust and Angela’s famous Glo Bakery Glo Bars, there is something for everyone. The Oh She Glows Cookbook also includes recipes free of common food allergens – with more than ninety gluten-free recipes – and many recipes free of soy, nuts, sugar, and grains, too!

Whether you are a vegan, “vegan-curious,” or you simply want to eat delicious food that just happens to be healthy, this cookbook is a must-have for anyone who longs to eat well, feel great, and simply glow!